Target publication and audience: ‘Event’ consumer magazine (supplement of the Mail on Sunday) as it reviews products and is focussed on culture. The target audience is Mail on Sunday readers; a typical reader can be male or female, and is likely to be ranked ABC1 in the NRS social grade system.

In an age of self-improvement, where health and fitness is key, the rise of wearable monitoring technology is hardly surprising. But when does calorie counting turn from an option to an obsession?

Beads of perspiration form across furrowed brows. The gentle whirr of gym machinery coincides with the incessant thud of pounding shoes.

Health improvement can be defined in different ways. For some, it means working off that Christmas weight. For others, it’s a way of life.

Kim Campbell was given an Apple Watch as a present last Christmas.

Having become interested in running, she wanted to track her progress and admits it’s become an obsession.

“I run three times a week,” Kim said. “I’m in a running club where we’ve all got some form of monitoring device. They get quite excited when they’ve hit their 10,000 steps.”

Kim says she doesn’t have “a particularly addictive personality. I do check it every couple of hours though.

“I looked at my watch last night, bearing in mind I’d done a 10km race yesterday. It told me I hadn’t stood enough, so I got up at half-past 11 to reach my target of standing for 12 hours.”

The Price of Success

For the £8.00 cost of an off-peak cinema ticket or a couple of glossy fitness magazines, consumers can buy a TW64 Smart Bracelet.

It’s water resistant and bluetooth enabled, while also equipped with its own digital clock, activity, steps and sleep tracker.

Alarms can be set to remind users when to wake up, drink water and move around if they’ve been inactive.

Reviews are largely positive, with one person even comparing it to the much more expensive brand leader Fitbit for its high accuracy.

Pretty neat for a device which costs less than the average main course in a restaurant. 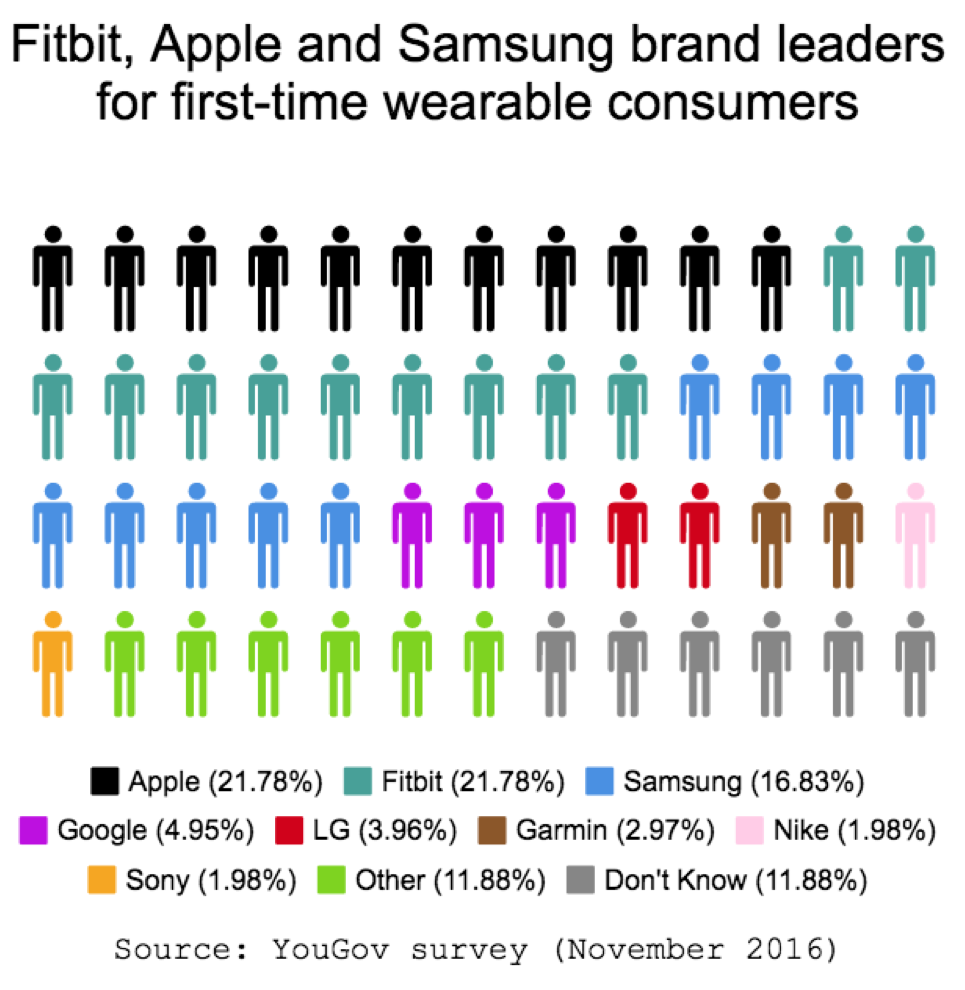 Created using Piktochart. This is a US study. View the original size image by clicking on the infographic. The survey data’s been rounded up or down for display purposes. Therefore, although the data adds up to 101%, this isn’t an error. To view YouGov’s research, click here.

Why Pay the Difference?

Fitbit will exchange a faulty device free of charge, within a year of purchase.

“I wear mine every day and find it massively useful in the summer when I’m away from the football club. It gives me everything I need.

“In our dressing room, everyone tracks themselves and has a heart rate monitor. It’s massive across football.

“I also use mine for clocking sleep. It buzzes when I should go to bed.

They have the largest fitness community, their app is the most widely available, and they’re at the forefront of new research.

Whole social networks have sprung up in reaction to this phenomena, allowing people to share their progress and encourage fellow users to reach their goals.

The general lower accuracy of economy models may also be a deciding factor for users.

According to a YouGov UK study, 3.6 million people owned a wearable device last February, an increase of 750,000 from the previous quarter.

As technology gets more advanced, previous versions become cheaper and more accessible to the wider public.

Some argue wearable devices have gone one step too far. Telegraph Columnist Alan Tyers is a fierce critic of wearables, writing in 2014, that it’s “a step towards detaching us all from actual life”.

He tests new products for wearable companies and is the Contributing Editor for technology news website Digital Trends.

He said: “Wearable tech’s been around for quite some time and started to achieve some scale in the U.S. around five years ago.

“The technology is starting to catch up with its early promise. Data accuracy has to improve but once that happens, we’ll see a willingness to use wearables to better manage medical conditions.

“There’s a false sense of obsession in many instances. In the U.S., wearables tend to have a shelf life of six weeks to three months.

“Most consumers don’t know what to do with the data. Many people have an underwhelming experience.

“There’s a false sense of obsession”

“I think the UK is following a similar trajectory to the U.S. Over here, one in five consumers own a wearable. In the UK, it’s one in six. We’ve been stuck at that number for some time so we’re hitting that proverbial ceiling.

“The newer phenomenon is smart fabrics. Evolving technology is capable of tracking a range of metrics that are critically important to many.

“We’re starting to see devices that break free of the commodity zone and are capable of measuring respiration, perspiration, hydration, and brain activity.”

View the print magazine spread of this feature by clicking here!