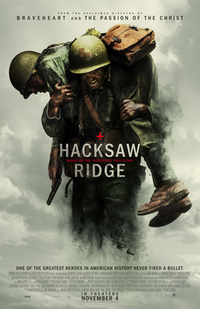 Mel Gibson returns in his latest directorial role, which has been described as his best film since Braveheart. This film has already been nominated for six Oscars including Best Motion Picture and Best Performance by an actor in a leading role for Andrew Garfield. The most shocking nomination must be Best Achievement in Directing as for the last ten years, Mel Gibson has been shunned in Hollywood. But his latest film is so visually impacting and shocking with a bold script, I am not surprised he’s in the Academy’s good books.  This outstanding War Drama, which is based on a true story, deserves these nominations.

Desmond Doss (Andrew Garfield) signs up to serve his country as a medic in the American army in the Battle of Okinawa. His aim is never to touch a gun. He has strong Christian morals that he will never kill. This makes him very unpopular with his commanding officers (Sam Worthington, Vince Vaughn). Even though Desmond doesn’t kill, he manages to save the lives on his fellow soldiers.

“It immerses you into the violence of the war but it also tells a story of a young man who believes in his morals.”

This isn’t an easy film to watch, as this must be one of the few war films that show the blood and gore of the battle and leaves no detail out. This contradicts the theme as the main protagonist who doesn’t want to use violence.

Mel Gibson shows the truth about war and the suffering of soldiers. Normally war films scuttle around the blood, violence, and suffering. Especially in American war films, where the hero is a stereotype of uncle Sam and then focuses on the tough hero’s achievements but this film is the opposite. Desmond is a normal man, think of forest Gump. Andrew Garfield’s accent is very like the iconic character. He isn’t a hero in any of the character’s eyes in the beginning of the film, he’s shown as being weak. Especially in his fellow soldier’s eyes. But they grow to like him as the iconic supreme scene of the Battle is played out in the second half of the film. There were some scenes where I had to look away because of the violence, but Mel Gibson has overall chosen an interesting, dramatic worth-telling story to help his comeback. This must be one of the greatest war films ever made.

Hacksaw Ridge works so well as it immerses you into the violence of the war but it also tells a story of a young man who believes in his morals especially the commandment “Thou shalt not kill”. Mel Gibson mixes two narrative elements to create a well-paced, shocking, true story film that must be one of the best films in the last five years.

Andrew Garfield is one of the favourites to win an Academy award for his dramatic performance. The casting was perfect for Hacksaw Ridge, Teresa Palmer plays Desmond’s girlfriend Dorothy, who worries about her gentle loving partner going to war without using a weapon. The outstanding Hugo Weaving plays Tom Doss, Desmond’s father, who is haunted by the war as he fought before. He hates the thought of both his sons going to fight after losing so much when he fought. Vince Vaugh, was superb as Sargent Howell, it was so nice to see him in a serious theme film. I’m so used to seeing him in comedy’s. He played the part so well, it was nice to see him play a tough serious, not to mess with type of guy but it was refreshing to see him mix comedy which helped to lighten tough scenes.

The cinematography was exceptional by Simon Duggan in the battle scene, he wanted to show the harsh truth of war. This helped to give the film the feel of Mel Gibson’s directorial hit Braveheart, which was also violent and bloody and Saving Private Ryan, which focuses on the battlefield and soldiers having to work together to survive. This shows how brilliant and complex Mel Gibson is as a director. When I watch his films, I always feel he has used all his skills and talent to make a film different to other feature films in the genre.  The screenplay by Robert Schenkkan and Andrew Knight is distinguishable, showing Desmond’s early childhood, his youth, entering the army and the bloodiest battle of all time. Hacksaw Ridge is out of any other war films league.

“Mel Gibson has made his comeback in Hollywood and will be accepted for this outstanding biopic.”

Mel Gibson is one of the greatest Hollywood directors, as well as Clint Eastwood and Quentin Tarantino. I am not surprised that when Hacksaw Ridge was shown at the Venice Film Festival in September, it got a ten-minute standing ovation. Hacksaw Ridge is gritty, bloody, and shocking and it is a film which you will be still thinking about once you have left the cinema. Mel Gibson has made his comeback in Hollywood and will be accepted for this outstanding biopic which makes the audience think about the horror of wars.