An End of an Era : Searching for Signs of Hockey Life in Britain

Through their sorrows, Ice Hockey fans explain how The Manchester Phoenix club have decided to call it a day, closing its doors to the public, after generations of sporting history.

In March 2011 the club was at the peak of its popularity. Fast forward six years and the team is closing its doors for the final time. The club attempted to save money. They restructured. All imports were dropped. Unfamiliar faces filled the ice.

“Ice Hockey is so much more interesting, its fast and tactical. Its a combination of both brains and brawn “ 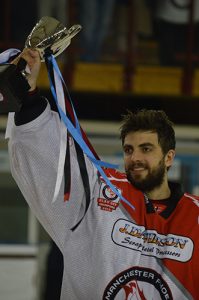 Through it all, the fans stayed loyal. At their last game, 400 people cheered as if they were at the cup final, sending the team off with a farewell celebration.

British Ice Hockey has for decades been a roller-coaster ride. Year after year, leagues fold and teams drop out due the financial burdens that Hockey brings with it. Ice Hockey is no longer a stable investment for both owners and investors in Britain.

“I was unhappy to call it an end,” said Neil Morris, owner of the Manchester Phoenix. “Business is last man standing, if you can’t make a profit, eventually you’ll starve to death.

You can’t trick people and continue to play on when you can’t afford to continue.”

While silverware is the memorabilia of all sports clubs, Phoenix’s foundations were built on charitable hand.

“My original motive was to build a foundation and take care of kids in deprived areas of Manchester,” said Morris. “We had one of the largest foundations which provided help to nearly three and a half thousand people every year.”

“Withdrawing a team from competition is not the end of the world, breaking up a community people who have been together for over a decade is. “

Morris is not the first owner to have suffered from financial difficulties. In 2015, Bracknell Bees struggled to sustain the wages of their players. Telford Tigers were next, facing debts of £500,000. However, fans firmly believe there is still hope for the team.

“Somewhere in my heart, I believe the Phoenix will return,” said Hockey fan, Kate Glover. “We did it before and we can do it again.” 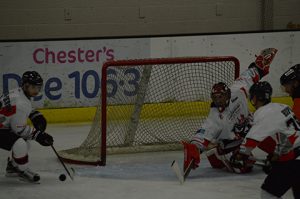 Unfortunately for fans, they receive the backlash. Robb Hitchen and Kate Glover served as long-time volunteers for the Phoenix. Although living 300 miles apart, Hockey bought the two strangers together. Having been so heavily in touch with the sport, the news left them both devastated.

“Its like like the loss of a relative or family,” said Kate. “You don’t know if you will ever get to see one another again”.

Closing the club meant that the season was cut short. Children, pensioners and sponsors all lost money. However, fans took the risk having anticipated the closure.

“I bought a season ticket knowing I wouldn’t get anywhere near close my value for it,” said Kate. “We were all looking at our bank accounts asking ourselves if we could help.”

Since 2015 the club have been without a permanent home. Games were instead played at Widnes Ice Arena, following spells at Deeside Ice Arena in North Wales and Flylde Coast Ice Arena, Blackpool.

Playing on the road soon took its toll. Flexibility in the budget became non-existent. The team were running out of money.

“We were hoping to be in our own building which would have eradicated the problems,” said Morris. “I didn’t want to ask fans to put their hands in their pockets to keep the club going.”

The teams attendance was soon under threat. Being so far away, it became impractical for fans to travel. Their previous arena which had homed 2,267 a game, halved.

“It became too much for people, especially when we moved to Blackpool,” said Robb Hitchen. “It was in an old factory where steel grinders blocked the view of the ice. Travelling a 2 hour round trip was unviable.”

With so many teams folding, figureheads are beginning to question the sport and demanding change from within.

“Its too difficult to run a team,” said Neil. “The support mechanism is non-existent.”

A lack of ice rinks has rocketed the price of ice time, impacting on junior development schemes. Teams are instead resorting to more imports.

“EPL is too high, competitively and financially,” said Ken Taggart, Chairman of the British Ice Hockey. “Under 18’s are the next generation of athletes and are dictated by the number of facilities”.

Changes are taking place according to Taggart, “The EPL is starting to compromise. The number of imports are being reduced from 5 to 3. This will provide more opportunities for British players.”

The prospect of closure is not new. Closing anything cherished by its supporters, homing years of memories is a familiar pang of heartache to fans.

As one door closes another one opens. Sadly for British Ice Hockey, more doors close than open…