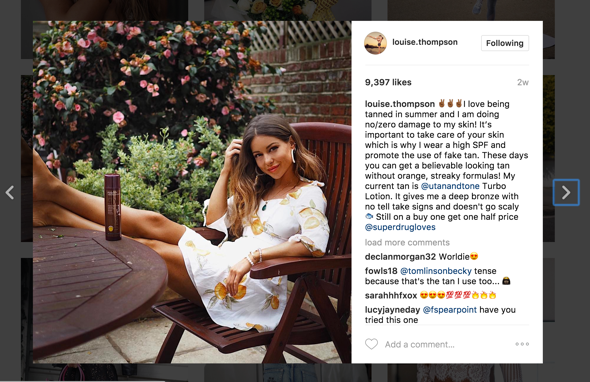 A fake tan addiction? What are the risks?

Published by elizalyons on 15th May 2017

A fake tan addiction? What are the risks?

Oh how times have changed…In the Victorian times, a tan would suggest you were a poor worker of the lower class, while the pasty white look would prove wealth and superiority. However, for many Britons these days, it is a race to see who can maintain the best and darkest all year round summer glow. It was not until 1920, when a tan was only associated with those fortunate enough to holiday on the Cote d’Azur (coast of gold).

Doctor Sarah Jarvis suggests that a ‘healthy tan’ is unobtainable, the colour of our skin darkening is merely our body’s reaction to skin cancer. So just how have Britons these days achieved a healthy glow without the expense of damaged skin?

In the UK, 41% of women use self-tanning products (BBC). With ST Tropez being one of the leading tanning products in the UK. They claim to sell 3 bottles of tanning mousse each minute around the world. British people have been found to spend 35 million pounds on fake tan each year in shops. With these shocking statistics, it’s a wonder what the extreme appeal is to those using fake tan.

A Fake Tan using salon worker replies to the question, is fake tan an addiction? In saying: “oh yes , definitely, fake tan is definitely addictive, especially for a nice occasion, especially with some self tan products, they have such a natural look, and it is addictive because people like to have that colour because they like the healthy glow.  However some people do just like it for a special occasion so I suppose it just depends on the individual.”

Fake tan has been widely advertised on many young girls’ role models for many years. These including the likes of Katy Price, Victoria Beckham and Cheryl Cole. Following this, many current female role models have continued the trend and are often seen to be promoting different brands of self– tan on their own social media pages. For example, Louise Thompson from the hit reality TV series, Made In Chelsea. Many celebrities like Louise hold great power on their social media platform to change the way that young girls wish to pr 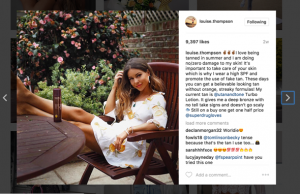 Social media seems to have created funny ‘memes’ revolving around the ongoing benefits and positives of tanning. This could be having a drastic effect on girls because even if they haven’t tanned before, they could see these posts and begin to tan, as the positives are highlighted and the fashion trend continues. 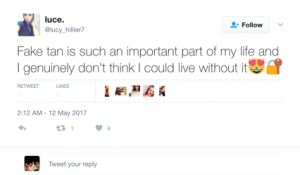 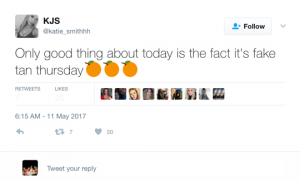 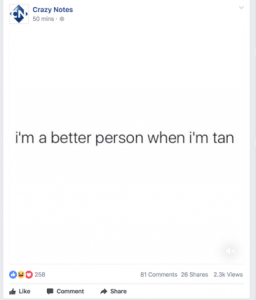 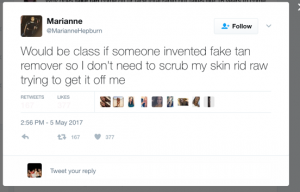 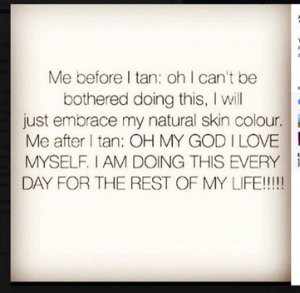 Fake tan works by changing the outer layer of dead skin cells brown, by the use of DHA which is also the element of fake tan that creates the sweet biscuit/mccdonalds smell.

Facebook’s creation Buzzfeed, has created an article under the following headline ’27 struggles Any Fake Tan Addict Will Understand’.  Therefore resulting in a universal acceptance for young girls that being a ‘Fake Tan Addict’ is funny or normal. When websites with such power should promote happiness and content within your own coloured skin, in 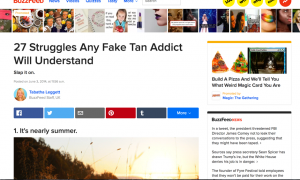 Fake tan user, Ellie Dair says it “I actually feel depressed when I haven’t got it on, it makes me feel sad to look in the mirror”.

this feel good bottle of self – tan sounds too good to be true.

The concept of fake tan has not been around long enough for scientists to completely confirm the long lasting effects of fake tan as of yet. One of the main elements that makes up fake tan is DHA (dihydroxyacetone). DHA reacts with your skin and cannot be washed off. Therefore, skin makeup that can wash off has proven to have little to no side effects. However, Cancer Research is able to confirm that using self-tan methods are safer than sunbathing or using a sunbed.

Binky Felstead, another Made in Chelsea star, volunteered to provide Fake Tan tips on the Cancer Research website in the hope to promote the use of fake tan and prevent skin cancer from sunbathing. 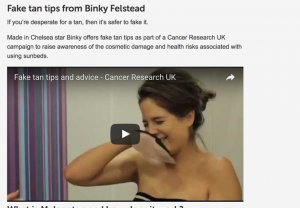 A self owned business owner in spray tanning expresses “I think fake tans are mentally addictive, not addictive in the way of affecting the body but some people have got addictive personalities and if they tan once they want to do it again and again. I’ve got girls that come to me quite a lot.”
“I think the benefits of fake tan is the feel good factor, it varies on the individual but it can make you feel slimmer. Its like when we go on holiday, we get a sun tan and our personality changes, we are more confident. In terms of the negative effects, no one has ever come to me with any problems.” She adds.