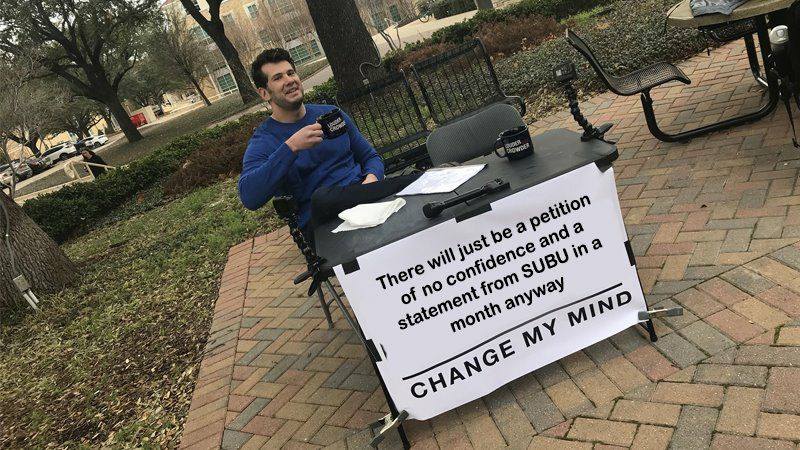 I wrote this opinion piece for Nerve Magazine but it was rejected on the grounds that SUBU wouldn’t approve. It’s a shame our student media is gagged in this way but thankfully the blog exists.

After last year, the pressure was on SUBU to get these elections right. Indeed, in my role on the executive committee I oversaw the changes to the bylaws that were made to avoid the problems of last year. But let’s face it, does anyone really feel like these elections went any better?

The rules and the enforcement of them failed to actually change anything, it just forced any rule breaking into private messaging with a simple “we can’t enforce it” from the Returning Officers. Tell me, what is the point of rules if they don’t apply in all scenarios?

To answer all this and to review this election properly let’s go back the beginning. The elections campaign started with the ‘Candidates Question Time’, in theory an opportunity for voters to scrutinise candidates. Tokenism, with one question from SUBU themselves and one question from students per role, it was hardly an exercise in scrutiny. It also certainly isn’t an opportunity to scrutinise manifestos, leaving candidates to promise what they like with no way to challenge.

Meanwhile, societies had their rights to free expression gagged as they and their committees were told they could not endorse or oppose any candidates. The excuse was that we couldn’t be seen to endorse candidates whilst “wearing our SUBU hats”, but I was free to endorse as a SUBU executive member as if that isn’t the same.

This hit a peak when my very own Liberal Democrat Society was threatened with “sanctions” by the SUBU elections team following a post I made endorsing candidates. Sanctions which they had no power to enforce, and that SUBU activities said they had zero business or power to threaten.

I saw complaints from friends, of harassment by candidates, swept aside by the elections team with non-answers. After last year’s harassment allegations, amongst others, led to a disqualification it seems unforgiveable that this would happen.

Of course, the results themselves would have to be equally farcical. Just a few hours before results are due to be officially announced, rumours start circulating that the results had been visible if you logged in to vote after the deadline. This was then confirmed by the elections team in an email to candidates. The leak was due to a setting on the elections system being set to the wrong option; at this point an unsurprising error.

Just before results candidates were required to fill out “feedback forms” for how the election was run. This is more sinister. Candidates report being made to complete the form in front of the RO’s. They also claim that the forms themselves were already completed with positive feedback.

Now maybe I should stop complaining and start proposing solutions, although by no means perfect, as elections are a messy game. The rules drew the ire of candidates and students alike, the fact that no former candidates were brought in to consult on where the rules might be circumvented is shocking.

Another solution should be to encourage staff members to report candidates for infractions, especially harassment. Students have complained for years about being “chased” through the Poole House Atrium, right under the nose of staff members staffing the election booths. We need to take a hard line on harassment because it’s driving disengagement from SUBU.

Let me be clear, this is not a criticism of the new full time officers, they will be held to account in numerous ways over the next twelve months. This is about SUBU. If the aim of this election was to restore faith in the SUBU election process it has been an unmitigated disaster.