Equestrianism and why it’s more than just horsing around

It’s one of the most dangerous sports on the planet. Yet many horse riders are frequently told, their passion, hobby and lifestyle, is anything but a sport. It’s time to settle the argument.

According to the British Horse Society, an estimated 2.7 million of us in the UK ride horses. Yet much to our disgust, we’re often told ‘horse riding is not a sport’ and ‘the horse does all of the work’. Words, which make every equestrians blood run cold. For we know otherwise and quite frankly have had enough of being told by people who have absolutely no idea what they’re talking about, that we just sit there and look pretty.

In the Oxford English Dictionary, sport is defined as ‘An activity involving physical exertion and skill in which an individual or team competes against another or others for entertainment.’ And evidently horse riding, involving both physical activity, skill, and competition, falls directly into this category. Notwithstanding its heavy appearance in the world’s most internationally recognised sports event, The Olympic Games. So without further ado, let’s look at how it fits this definition. 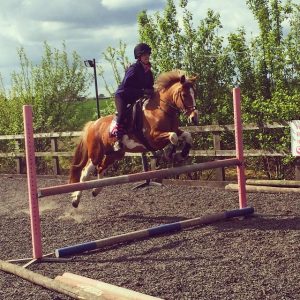 Jumping not only requires a certain level of skill but is also a full body workout.

Would you fancy being put in control of two-tonne beast that weighs more than your Kia 500? Perhaps not. And contrary to popular belief, the horse isn’t the only one working up a sweat while being ridden. In fact, horse riding requires just as much strength and burns as many calories as swimming or jogging, not to mention being great for the core and leg muscles. One must only glance at the thighs of an equestrian to realise that it’ll build your muscles just as much as a regular leg day down at the gym.

“Have you seen how much I eat?” laughs Sacha, 15, “If the work was only down to the horse I’d be obese by now!” As a member of The British Riding Club, Sacha has been riding since she was just four, and was left baffled by the idea that people could think it’s not a sport.

Anyone who reckons horse riding is not a sport is welcome to ride my mare and attempt to put her over a metre fence without falling off.

Even after a short ride, those who haven’t ridden or are just a little out of practice will notice muscle soreness. And while you don’t quite have to have the body of Arnold Schwarzenegger to take on a horse, you’ll need a certain amount of strength.

It requires skill and commitment 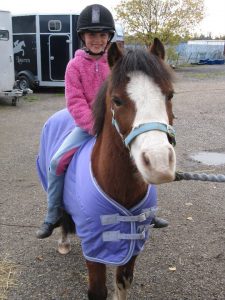 Many people devote their lives to horse riding from a very young age.

Alike any sport, it requires physique, skill, and dedication, not to mention a commitment to ever exhausting early mornings where a 7 am rise for a morning lesson soon becomes a 4 am wake for a competition.

“It’s 12 hours a day, 365 days a year.” Successful trainer and international event rider Vicki Hancox tells us, “If you speak to any top athlete, they’ll say they train every day, whether it’s Christmas Day or New Year’s Eve, people put their whole lives on hold so they can compete.”

Vicki spends much of her time training and competing horses for clients, and when she’s not riding, helps to run the family livery stables, and teaches riders of all abilities.

“To learn to ride properly, it takes forever. You never stop learning, even top riders will all say they have lessons every week and still feel like they don’t ride properly all of the time.”

Horse riding provides plenty of opportunity for competition. Whether it’s in teams between different branches of The Pony Club, representing your country in the prestigious Horse of the Year Show, or you’re just dying to beat the girl whose daddy has just bought her a new £20,000 pony after the other one put a hoof out of line (we know the sort).  When entering the arena, its make or break, literally. You can either clear a course of show jumps or fall face first into them.

So why is it that some people continue to argue against equestrianism as a sport? The only possible explanation that springs to mind is its subjectivity. In dressage, for instance, the judge has the final say on whether your transitions are smooth enough, or whether that half circle you’d been aiming for was really a circle at all.

But then again, one could argue the same with football, yes, the ball went into the goal, but did the team really deserve the penalty?

So it seems that the components involved in horse riding precisely define what a sport is. And to those who are still yet to be convinced, take a riding lesson. After about fifteen minutes on horseback with aching legs and sore shoulders, you might just agree that horse riding does indeed, fulfil the meaning of sport.