Is Independent Coffee taking the nation by storm?

Smaller forces are seemingly on the rise and set to challenge the large chain stores in success.

UK high streets are seeing more and more independent Coffee shops popping up in recent years. In 2016 a flourish was clear with almost a third of independent Coffee shop owners seeing an improvement in business of 20% plus. These figures clearly show that the public are now indulging in non-commercial Coffee Shops rather than the chains.

With this is mind, questions need to be asked regarding why we are shifting away from the big names such as Starbucks, Costa and Café Nero. Although your standard coffee drinker still exists today, more and more individual and diverse coffee consumers are paying a few extra coins to ensure they have a more organic and ethically sourced cup of coffee.

Independent Coffee shops don’t all go by the same stereotype, whilst many embody a very artistic and homely feel some try and find a happy medium for customers. Ian Saul owns the Bournemouth founded coffee company Naked Coffee, he started the business a year ago and now has two stores. The original shop was opened in Bournemouth with his Southampton store opening October 2016. Mr Saul believes he has a “different market” to the rest, his target audience being “people who are semi-concerned about their Coffee whilst still retaining affordability”. Naked Coffee source ethically grown coffee beans that they then roast themselves to sell on. Customers knows that they are getting a quality and luxury product at an affordable price with Naked Coffee, “People who care have come to us instead of using the bigger chains” Ian Saul explained. 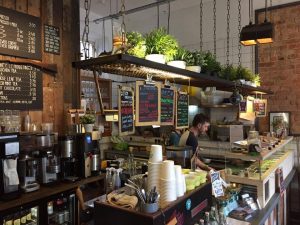 With recent changes in public demand, small business owners have certainly modelled their businesses to fit the independent/artistic image. More bohemian style coffee shops are becoming more and more common on UK high streets to fit the needs of the artistic and alternative members of society, or simply customers who want a brilliant cup of coffee made with love and care. Mr James Harris manages Bournemouth’s very own Bohemian coffee shop South Coast Roast, their one of a kind coffee experience certainly ticks all the boxes for a modern-day coffee drinker. With it’s rustic and edgy interiors they certainly promote themselves as an organic and honest coffee retailer, “You want to walk in and feel at home” explained Mr Harris.

The public are growing more and more observant to production of the commodities that we consume daily. Social media has a part to play in promoting negative representations of the big coffee chains, resonating the idea that the manufacturing process isn’t Fairtrade to the extent it should be, independent Coffee stores are shaping the way in which the larger chains brand their stores as a result. “The chains are trying to promote a more Italian artistic vibe that feels very artificial” said Mr Harris, as explained the bigger chains are clearly modelling their image to look more independent giving us more proof of an ever-changing hierarchy in the coffee trade. Interestingly Harris’ business has not been affected one bit despite being opposite Starbucks adding “If anything they’ve helped us gain customers”. Consumers becoming less passive has caused change in demand. This is certainly the case at local Coffee shop South Coast Roast, Mr Harris added “I think people are becoming more aware of the bean to cup process”. Customer’s demands have certainly impacted the way in which they market their image.