The home of Football certainly has a lot to be proud of in it’s involvement making the beautiful game what is today. Every year thousands of young, talented footballer get accepted into the top english football club’s academy systems. Whether it’s in the Premier League or League Two, many youngsters are being given the opportunity to make their dreams come true by playing for a top football club.

Top football clubs such as teams in the Premier League have a tendency however to ship the youngsters out on loan if they aren’t making the first team. The club does this to generally get the players more experience and game time under their belt so that they can come back to the club at some stage with increased confidence and ability. Chelsea Football Club are one of the biggest and most successful football clubs in the last decade subsequently drawing attention from some of the biggest players in world football. Chelsea FC in recent have become attached to criticism over youth team players on loan in recent years, with currently 37 men away on loan, some of which who have been gone for two or three seasons. Many of which simply will never get a look into the first team. 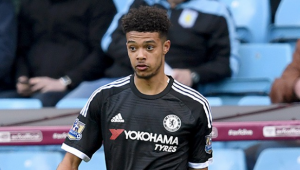 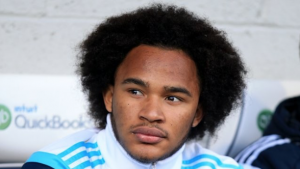 Time for more of a chance?

Many supporters and pundits are constantly debating the same topic when it comes to youth football. A lot argue English clubs should focus on developing their younger, less experienced players instead of spending millions upon millions every transfer window.

Other countries tend to try and adopt a different method when it comes developing youth team footballers, for example in Spain academies are incredibly important to their footballing institution with a vast majority of their players coming from the development programmes. More and more English clubs are trying to use these techniques in the attempt to make English football a whole lot stronger. Premier League giants Manchester United and Arsenal FC are well known in recent years for  spending millions on making sure their youth team players have the preparation and development needed to try push for first team football. Clubs such as Everton FC and Southampton have been applauded in recent years for playing alot of their younger players in big Premier League fixtures, players such as Holgate and Calvert-Lewin making a big impression on their boss. 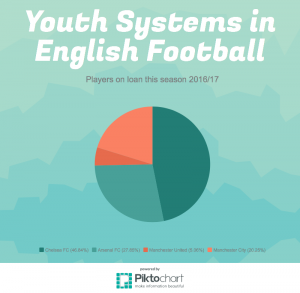 As the infographic shows, Chelsea FC have the biggest number of Loaned out players amongst some of England’s top clubs. Manchester United definitely like keeping their players at the club to gain experience with only 4 players in total this season leaving Old Trafford on loan.

Every academy works in a different way and clubs have their own ideas around helping youth team players gain experience. The bigger english clubs are more likely to loan out their players as squad depth is considerably more extensive than that of a weaker Premier League club. These are the clubs that often pounce on the opportunity to sign the top team’s players.