Posted by callumnicholas in Features

eSports is a massive industry that has become a phenomena. Where did it begin and why is it so popular? Callum Nicholas investigates.

When you think of sport, football or cricket probably comes to mind or the other physically, demanding team based games such as rugby and basketball. These sports have been around for hundreds of years with matches attracting huge crowds worldwide. Now a new contender has arrived which could change the way we view sports, not just from a content based perspective but from a social and cultural standpoint too.

If someone said to you that you can be a professional gamer, some may be open to that idea while others may laugh. It is starting to become a reality, with places around the world even offering scholarships to players of some of the most popular games such as League of Legends and DOTA 2.

Just two years ago, the first dedicated eSports stadium in the UK was built in Fulham with hundreds of other stadiums around the world hosting tournaments and championships for video games. There are thousands of people travelling around the world to support their favourite teams as they play video games “competitively”. In South Korea, the game StarCraft 2 is considered a National sport. 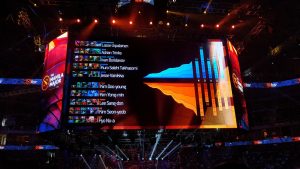 Video games require you to have fast reflexes, great hand-eye coordination, be able to communicate well in a team and spend hours every day training and practising with your team in order for you to stand a chance in going up against some of the best teams in the world. Competitive gaming is seriously tough work.

Traditional sport will not be going anywhere for a long time. Just like print media, there will always be a market for it but with an ever-growing population deciding to look elsewhere for a glimpse of the future, eSports may be what they are looking for.

There is room in the competitive scene for the both of them but that does not mean that everyone is going to be happy to accept that. Up until now whenever eSports is mentioned in the media, it tends to be frowned upon and heckled at, dismissing it as nothing more than “ridiculous”. But with the video game industry being worth an estimated $99.6 billion in 2016 and the games industry making over twice the amount of the film industry in 2013, it’s hardly surprising to see that more traditional sports are starting to take notice of this new sensation.

In October 2016 Manchester City signed Kieran Brown, an eSports FIFA player, to represent the club at fan events and official tournaments as well as live streaming on the popular gaming stream website Twitch. Kieran Brown is the second eSports player to be signed in the UK, with West Ham signing Sean Allen in May of the same year.

A big reason as to why eSports managed to become widespread is because of the streaming platform “Twitch”. Twitch is a service that allows gamers to “stream” the video games they are playing to mass audiences and allow them to interact, not just with the streamer but the community as well. Video games were kept strictly to an online platform for a long time up until recently when something major happened.

For one of the first times in history, eSports was broadcast on live national television in America. ESPN2 (one of the biggest sports programs in the United States) chose broadcast the “Heroes of the Dorm” championship which saw college students compete in the video game “Heroes of the Storm” in order to have their tuition fees paid for them. This would create a precedent for the future.