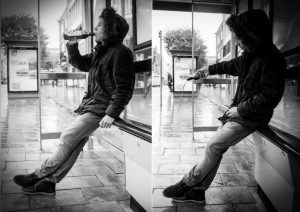 Drug addiction and alcoholism has always been a problem. No matter where you are, there’s always someone asking for spare change to get into a shelter or for a hot drink.

It’s not difficult to notice the beads of sweat forming on their forehead, the cracking on their lips from chewing on them so hard, the fragile tremble in their hands. Classic withdrawal symptoms of most, if not all, drug users or alcoholics.

Having a quivering mess in front of you is not a great sight, but few people empathise or think about what is going on in that person’s life. Alcoholism and drug abuse usually isn’t something that people choose or strive to have as an occupation. Nine times out of ten, people turn to substances as an outlet for grief, if they feel like an outcast and more commonly, to deal with the stresses of mental ill-health.

One-in-six adults has a common mental disorder such as anxiety, spells of depression or stress. These are more common in people who live on their own, are in poor physical health or claim Employment Support Allowance.

In children and young people, common mental disorders are on the rise, with one- in-ten suffering with anxiety disorder, depression or stress. The figures have almost doubled between the years 1980 and 2000 according to Young Minds. Because of this there’s now a greater pressure on medical outlets, with more and more people committing mental ill-health acts such as self-harm or overdosing.

Anxiety – A heightened state of mind”

For some, anxiety is an everyday battle. The trepidation of stepping outside the front door is too much to deal with. There’s the constant fear that people will judge, stare, try to strike conversation even. Though some of these thoughts are irrational, it’s something that haunts the sufferer every minute they’re awake.

If there was something that could neutralise that feeling, many would take it.

Henry*, 21, South Devon, did exactly that. As a chronic anxiety and depression sufferer, he craved to feel normal for one day. At age 15, he discovered alcohol which became a binge drinking habit at the weekends. The burn that trailed down his throat at his first sip, the heat that settled in his stomach and the numbness that flooded down his legs was a feeling he’d never felt. He suddenly had the urge to go out and have conversations with people. Shortly after, the normality he felt when drunk was enough for alcohol to take over.

As the experimentation grew, he went looking for the perfect substance that would take all of his worries away.  Not only were his debts beginning to grow because of his new found obsession but his anxiousness and depressive spells became more intense and more frequent. As well as substance abuse, he also turned to self harm. It was the only thing in his life that he felt he could control.

After taking a number of pills, sniffing amphetamine and cocaine, smoking cannabis and drinking until he passed out, there was one thing that he had experimented with that made him feel free from the cage that was his own mind.

Despite knowing that he was playing with fire, feeling free far outweighed being burnt.

“I’ve always had anxiety but I never really knew what those feelings were until I was about 13. I started drinking with my friends when I was 15 and when I was drunk. I didn’t feel scared anymore,” explains Henry*, who moved to heroin after a few years because alcohol was making him seriously ill. Gastroenteritis followed, resulting in hospital stays with pancreatitis flair up’s.

“I would get drunk only to end up going back in hospital for days at a time,” Henry* mumbled, with his hands locked together tightly, his stubbed nails digging into the skin of his knuckles.

He burst into tears when explaining what it felt like when he realised that he got addicted to heroin.

“Realising you’re a heroin addict is like being told you have a terminal illness. All you ever hear is how heroin addicts can very rarely get clean. It’s a battle for the rest of your life to either get clean or to stay clean.” He stutters, a tremble in his voice. 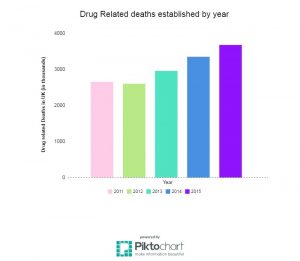 Annette Ivey, Manager of YADAS (Young Adults Drug and Alcohol Services) in Poole stated that she has seen an increase of 18/24 year old’s wanting to attend the services that they provide.

“We offer a range of services for young people and adults. We have an outreach team that will see people personally and we work in partnership with Poole hospital so we can provide education to those experimenting with drugs and/or alcohol. Our main aim is to educate people and help those who want to be helped as well as providing harm minimalisation, in other words, educating people about clean injecting, not sharing equipment and stocking items that can help prevent overdoses.”

According to Annette, more people who are seeking help with their addictions, have mental health issues.

At least 40% of our patients have mental health problems.”

“At least 40% of our patients have mental health problems. Most have anxiety, depression or ADHD and are self medicating with substances to try and ease the pain that those illnesses are causing them.”

With budgets to mental health services being down by 8% in the past five years and the amount of referrals increasing by 20% according to Young Minds, more mentally ill people are forced to suffer or are feeling pushed to self-medicate.

Annette says, “Governments need to pay more money into mental health services because the amount of referrals we are getting who suffer with lower end illnesses like anxiety, depression and ADHD is increasing. They’re under strain and until these services are more accessible, the figures will only continue to rise.”

If you have been affected by anything in this feature or are suffering with a mental health illness or addiction, please seek help from some of the sources below.

* Is used to signify the use of an alias name